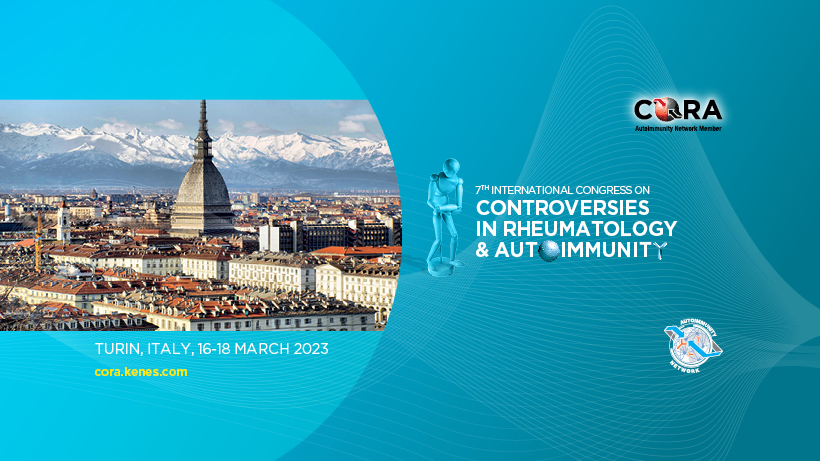 7th International Congresses on Controversies in Rheumatology and Autoimmunity (CORA 2023)

by
5 5 people viewed this event.

New autoimmune syndromes are being discovered and described rapidly by leading scientists and these findings raise further questions related to the clinical diagnosis, management, as well as the pathogenesis of rheumatic and autoimmune disorders. CORA 2023 will feature major and short debate sessions, scientific lectures, abstract presentations, sponsored blocks, as well as many other exciting new session types! CORA 2023 is where difficult clinical cases will be discussed by top experts.
Following the success of the 5th and 6th International Congresses on Controversies in Rheumatology and Autoimmunity (CORA 2019 in Florence and CORA 2021 held virtually together with the 14th International Congress on SLE) and the 13th International Congress of Autoimmunity in Athens, it is our great pleasure to welcome you to Turin, Italy, for the 7th CORA Congress.

First launched in Florence in 2011, CORA has since become a major event in the field of rheumatology and autoimmunity thanks to its fresh and intuitive structure featuring debate sessions on burning and controversial issues. The last in-person CORA congress in 2019 attracted over 850 participants and after a long period of virtual events, we expect to reach as many as over 1000 delegates in 2023 to join us onsite in Turin.

CORA 2023 will feature the well-known and highly attended debate sessions where scientists passionately defend their convictions on burning issues. We have also prepared a rich portion of scientific lectures, abstract presentations, sponsored blocks, and curbside consults where controversies on different topics will be presented and discussed by top experts.

Today, new aspects and new drugs are being discovered in rheumatological and autoimmune conditions including rheumatoid arthritis, spondyloarthropathies and systemic lupus erythematosus to name just a few. New discoveries and descriptions are being rapidly released by leading scientists and these findings raise further questions related to the clinical diagnosis, management, as well as the pathogenesis of rheumatological and autoimmune disorders. The scientific program of CORA 2023 will cover many of these issues through a range of debates on contemporary and controversial topics.

CORA 2023 promises a bountiful and cutting-edge program, and we look forward to your contribution by submitting an abstract and joining the discussions on these issues.

We await to see you in Turin, Italy, on March 16th – 18th, in the wonderful surroundings of the Centro Congressi Lingotto, offering one of the best views over beautiful Turin.